Beatrice Dacomb was born in Portland, Victoria (Nov 22, 1863), the daughter of a merchant. With her younger sister, Clara Thurston Dacomb (1867 – 1946), who likewise remained unmarried, Beatrice was the inventor of the Dacomb shorthand system, which was later officially adopted by the Department of Education in Victoria (1943).

The sisters co-wrote Web Speed (1921) and established the Dacomb College in Little Collins Street, Melbourne (1936). The Dacomb shorthand was later adopted in Buenos Aires in Argentina (1956) and in the kingdom of Tonga (1974). Beatrice survived her sister, and died (Feb 12, 1947) aged eighty-three, in South Yarra.

Beatrice Eliza Dacomb (1863-1947) and Clara Thurston Dacomb (1867-1946), co-inventors of Dacomb shorthand, were born on 22 November 1863 and 15 October 1867 at Portland, Victoria, sixth and eighth children of Edmund Dacomb, merchant, and his wife Eliza, née Evans, both English born. Beatrice matriculated with honours, taught at Kilmore Ladies’ College, obtained registration as a teacher of shorthand in 1914 and practised privately. Educated at Holstein House Ladies’ College, South Yarra, Clara matriculated with honours in 1886 and gained a Pitman shorthand diploma. In 1899-1914 she worked as a matriculation coach and commercial teacher at Methodist Ladies’ College, Lilydale High School and various secretarial colleges before becoming in 1914 proprietor of the School of Shorthand, Block Arcade, Melbourne.

In 1918 a friend called upon the sisters’ well-known expertise to help him prepare for a shorthand examination in three months. His failure prompted them to invent a simpler form of shorthand. In 1921 they published a book on their system, Web Speed. From 1922 they taught it at the Australian Commercial College, Collins Street. It was tested in Essendon High School (1923), University High School (1928) and several private schools (1928-29) with satisfactory results. Following a formal trial against the Pitman system at Coburg High School in 1933, it was widely used in private and government schools, and was officially adopted by the Department of Education in 1943.

After their deaths the Dacomb College was run by Mrs Jean Joy whom Clara and Beatrice had chosen as their successor. Under her management, a Dacomb college was established at Geelong, with G. A. H. Lang as principal. The last barriers to the system fell in 1955 when a Dacomb student was admitted as a court reporter and in 1972 when two students were appointed Hansard reporters for State Parliament.

Basically phonetic in form, Dacomb shorthand was adaptable to foreign languages and was introduced in Buenos Aires, Argentina, in 1956 and in Tonga in 1974.

When Joy retired in 1977, the Melbourne college continued in other hands until it closed in 1984. Ownership of the Geelong college was transferred to Lang.

Although Dacomb shorthand is still taught there, as well as in some technical colleges, it was generally in decline from the 1970s, largely due to the emergence of a simplified form of Pitman shorthand which was adopted in high schools and colleges of advanced education from 1975.

This article was published in Australian Dictionary of Biography, Volume 13, (MUP), 1993 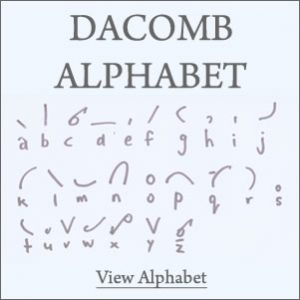